Decreases in both tax rate as well as the amount to be raised by taxes.

On Wednesday’s Council Meeting, the 2022 Municipal Budget was unanimously passed.  While final total tax amounts will be dependent on the adoption of the school budgets (both Highlands Elementary and Henry Hudson Regional), estimates have been based on their preliminary numbers for illustrative purposes.

Some of the highlights from this year’s budget:

To review the budget in detail, you can find it here: 2022 Proposed Budget

Some additional graphical summaries of the budget are below: 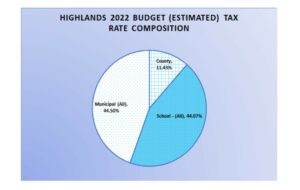 Be a good neighbor - leave no poop behind!

Land Use Board Meeting: Thurs., Dec. 8th at 7pm