The Highlands Garden Club is comprised of local residents who volunteer their time and labor to beautify the community. The Garden Club creates and maintains flower beds at Huddy Park, Veterans Park, Gertrude Ederle Park and Cornwall Square. 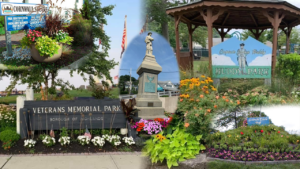 The Borough of Highlands has a new pocket park nestled in the central business district at the corner of Bay Avenue and Cornwall Street. Cornwall Square has been renovated from a vacant lot to an inviting pocket park. The park was designed by former Highlands Garden Club President Marcia Shaya. Collaborations from many concerned parties made this park possible. The park renovation was sponsored by the Highlands Business Partnership. The lot preparation and paved walkway were provided by Frank Rahm Landscaping Company and the trees were donated by the Highlands Shade Tree Commission. Additional shrubs and perennials were donated and planted by the members of the Highlands Garden Club.

Gertrude “Trudy” Ederle was the first woman to swim the English Channel on August 6, 1926, at the age of 19. Despite swimming in stormy weather conditions, Miss Ederle broke the previous channel swim record and received a ticker-tape parade down Broadway in celebration of national pride. Miss Ederle set 29 national and world amateur swim records and won a gold and two bronze medals for the U.S. swimming team in the 1924 Paris Olympics. Miss Ederle spent childhood summers in Highlands and learned to swim in the Shrewsbury River. She also trained for her channel swim in the swift currents of the river. Gertrude Ederle was truly an inspirational pioneer for women’s athletics. For years after her swimming accomplishments, Miss Ederle would return to Highlands and stay at the Stowaway Hotel that once stood across Highway 36 from the Park.

Ernest “Sonny” Vaughan took a vacant lot and began development of what was to become the park we celebrate today. A group of lady gardeners from town, called the “Green Thumbers”, also lent a hand planting the park. The park was first dedicated to Gertrude Ederle on August 14, 1975. Trudy attended that ceremony.

In 1992, Eleanor Huson, presented a plaque commemorating Miss Ederle. Over the years the Highlands Garden Club continued its dedication to Ederle Park. With donations from the community the Club expanded the flowerbeds, installed the flower urn and made a sign post for the plaque. August 21, 2003, the Garden Club again hosted a rededication ceremony in the park, and this time Gertrude ” Trudy” Ederle, at 97, showed up in person and communicated her love for Highlands. Ederle was a great pioneer of women’s sports and deserves recognition for her courage and accomplishments.

The Highlands Garden Club has adopted Huddy Park to plant and maintain. With funding from the Highlands Business Partnership to purchase plants, HGC members plant the flower beds around the gazebo and the Veterans’ Monument. Huddy Park has pre-Revolutionary War significance.

Veteran’s Park, located on Bay Ave., in the heart of downtown Highlands features flags and cannon and a Tablet “erected in memory of those in Highlands who lost their lives in WWI and WWII that liberty might not perish.” With financial support of the Highlands Business Partnership, the Highlands Garden Club plants annuals at three locations around the park.